Here is my Countdown to Christmas movie list that includes all my favorite movies, new and old! There is a new movie for each day in December. Watch along with me or just pick out a new movie to try.

I asked friends, family and followers for their favorite movie suggestions, because there is no way I could see all the Hallmark movies and decide which ones were worth repeating.

Some of these films are old, but are filled with such warmth and heart that I want people to be aware they exist! Some are just funny and others I love for the beautiful sets.

So here we go on a movie adventure through the month of December!

Who doesn’t love this zany, sweet story of Buddy the elf who grows up in the North Pole at Santa’s workshop? The sets are beautiful and partly set in New York which is just about my favorite backdrop for any movie.

This sweet movie won me over with the adorable set design and graphics. It’s a cute movie without the scariness. Definitely worth a watch.

This live action version of the story has the most amazing set design and the cutest Who’s ever. I cannot choose a favorite version, so here are both for you to choose from.

This classic tale of a father/son strained relationship is heartwarming after the father becomes the new Santa Clause. The north pole is beautiful. Normally I don’t care for sequels, but Santa Clause 2 and Santa Clause 3:The Escape Clause are terrific because they bring back all the original cast and each tells a new story.

This 1987 classic stars Keisha Knight Pulliam and Rue McClanahan is a story about bringing a family back together after the son of a wealthy man marries a woman from the wrong side of the tracks. It’s hard to find, but so worth it. I had the VHS that I had transferred to a DVD.

This goofy movie is so ingrained in our holiday culture that I bet you could ask anyone on the street to quote this movie and they would be able to come up with at least one quote. It is funny and ridiculous but at the heart of it is family and love.

Whitney Houston and Denzel Washington star in this adaption of The Bishops Wife. If those two aren’t enough to get you to watch this movie, I don’t know what will. She sings throughout the whole movie and Denzel is the angel Dudley, sent to help the preacher through a crisis of faith, but ends up falling for his wife!

The ultimate house swap between Kate Winslet and Cameron Diaz has both charm and heart. Kate Winslet’s friendship with an old Hollywood screenwriter is the stuff of dreams. Cameron and Jude Law fall in love in the English countryside, complete with adorable cottage, stone fireplace and mounds of fluffy snow.

Another older movie about one of Santa’s reindeer getting lost and the love of a little girl to help reunite Santa and Prancer.

Vince Vaughn and Paul Giamatti star in this Christmas tale about Saint Nick’s beginnings and his less than pleasant brother who is always up to some scheme. I was shocked at how beautiful the design of the sets were, especially for a comedy.

This black and white comedy brings a post World War II issue of veteran homelessness into light. The very rich and the less fortunate clash in one house over the Christmas holiday which results in some hilarious conflict. Hearts are changed and second chances are given.

This story of Susan Walker and her mother has been told many times, but this is my favorite version. It’s set in the 1990’s in New York City and as above, NYC is my favorite backdrop for a Christmas story.

No Christmas season would be complete without seeing this Holiday classic of Kevin McAllister outwitting two nefarious burglars after being accidentally left at home during a Christmas vacation. Another sequel that’s almost as good as the first is Home Alone 2: Lost in New York. It’s set in New York which we have already covered is my favorite and all the original cast returned.

Queen Latifah shows us how to live when you get a terminal diagnosis…except that she actually didn’t. This comedy is so full of laughs and luxury, it’s a treat to watch.

There aren’t many Hallmark movies on this list, but this is one that I watch every single year. I love older townfolk who gossip and get all involved in the youngsters romance. The music is a little cheesy but this movie has so much heart.

Candace Cameron stars in this Hallmark channel movie about a girl who is stuck in a life she is too afraid to escape after heartbreak. It’s funny and has really cute shoes!

16. Santa Claus is Coming To Town

This stop motion classic tale of how Santa came to be is a short film, but worth a watch. The sweet Kringle family takes in baby Kris and elves teach him how to make toys.

17. The Shop Around The Corner

This movie is basically a black and white version of “You’ve Got Mail”. Jimmy Stuart falls in love with his anonymous pen pal girlfriend while unbeknownst to him simultaneously competing professionally with her in their day job in a shop.

18. Christmas with the Kranks

I just realized that this is the fourth movie on this list with Tim Allen as the lead, but there you have it. This tale has it all romance, comedy (the neighborhood watchdog is Dan Aykroyd) and adventure(falling off the roof, police chase and burglary)!

Anything with Madea in it is a homerun for me. I have seen all the Madea show’s and this holiday treat does not disappoint. Add in Larry the Cable Guy and Kathy Najimy and this movie is funny, touching and timely.

20. The Most Wonderful Time of the Year

Henry Winkler (the Fonz) stars in this fun uncle/niece show. He brings a stranger he met in the airport to her house for Christmas and lets just say she is not a “go with the flow” kind of gal. Of course they fall in love, but not without a big grand gesture (from her!)

A magazine food writer has gotten in over her head by writing a fictitious life that her boss believes is real. She gets herself in a real pickle when the boss wants her to take home an injured sailor for Christmas…to the house she doesn’t own, with the husband and baby she does not have! I laughed so many times during this movie because of her Uncle Felix who comes along on the charade to help with the cooking. The farmhouse she uses is absolutely gorgeous and the love story is beautiful.

Jim Henson never got to see the finished version of this beloved Christmas classic, but I’m sure he would have loved it! It’s touching and sweet with cute musical numbers and funny characters.

This nursing student makes a run for it with her niece and nephew a few days before Christmas when DFS comes to take them away from her sister who is in jail. She runs to this small town and shelters for the night in a beautiful Victorian house. A case of mistaken identity allows them to stay a while in the town and become a part of the family. Gorgeous house, sweet neighbors and an Angel in the mix. Super cute!

I don’t really need to write anything about this amazing show except that someday I would really like to wear a red sparkly dress with white fur collar and muff like Rosemary Clooney wore in the final scene. Just dreamy!

HAHAHAHAHAH, just kidding! I had to throw one movie on here for all the men who groaned and rolled their eyes during the entire month of December with all our sweet love stories. It’s fine, just let them watch it because the rest of us will be cooking, hanging with family and cleaning up the disaster that used to be the living room. I mean, this movie does start on Christmas Eve right? So it kind of counts!

I hope this list gave you a new movie or two to watch. Maybe it just reminded you of an old classic from your childhood that you would like to watch again.

Either way I hope you are filled with the joy of Christ’s birth this season. 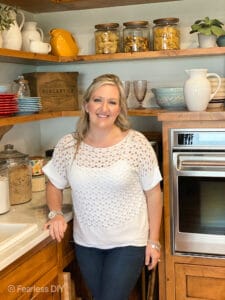